Capture Images Larger than You Plan to Use in Photoshop

Whenever you import an image into Photoshop, regardless of whether you captured it from a digital camera or a scanner, it's important to assign an accurate file resolution, as discussed in the section "File Resolution" earlier in this chapter. The reason is that it is very difficult to increase a file's resolution at a later date and retain the same quality.

For example, suppose you scan an image at 72 dpi—the common resolution for web graphics— and later decide to also use the image in your company's printed brochure. If you've ever tried to print a web page that has images on it, you've likely realized that web graphics don't print that well. This is because web graphics are typically created at a very low file resolution—72 dpi—while today's printers are capable of printing at much higher resolutions. When you print a file with a low resolution, you can actually see the dots on the page, causing the image to appear "dotty" or speckled.

In order to have that image print well in your company's brochure, you'd need a file resolution that is ideally closer to 300 dpi. So at this point, you have two options: rescan the image (as long as you still have it!) at a higher resolution, or attempt to "resample" the image in Photoshop.

Resampling is discussed in the next tip, "Adjust an Image's Resolution in Photoshop.

U To determine the appropriate resolution at which you should capture images, consider the following tips:

• If you're a designer working with images that will ultimately be displayed on the printed page using a halftone printer (such as one that produces color separations for four-color process printing), scan at 1.5 to 2 times larger than the printer's screen frequency or line screen (lines per inch = lpi). (See Table 3-5 for common screen frequencies, but check with your printer to be sure.)

• If you're working with images that will be printed using an ink-jet printer, you don't have to use as high a resolution, because ink-jet printers tend to "bleed" the color across the page. This causes those tiny dots to blend together and reduce the speckled appearance of low-resolution images. In fact, scanning at 150 dpi is usually sufficient when a file will only be printed on an ink-jet printer.

• If you're working with images that you plan to use only on a web site, I recommend you capture them at 150 dpi, even though you'll probably downsample them to 72 dpi for the final web page. The reason I recommend this is that it offers you a higher-quality file with larger pixel dimensions—meaning you can use it at a larger size in your design if needed, and you can also downsample it later to actually increase the quality of the image.

• If you're using a digital camera to capture images, consider using the highest quality setting on the camera if your storage method allows you to. Even though you may not think you'll need to use the file at such a high resolution, you're better off having a copy at the higher resolution if you need it later, given that you can't "rescan" a picture taken with a digital camera.

Understanding Adobe Photoshop Features You Will Use

Get My Free Video 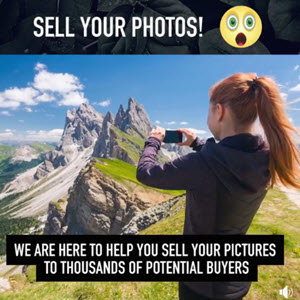 How to Sell Stock Photos Online